Discover what we love to read and watch. Ask us for suggestions on what you should read or watch next. We review books on our Current Picks blog and movies and music on our Shows 'n Tunes blog. We also create lists on popular book and movie topics. Why? Because we have a passion for making recommendations for you.

David Goggins found the inner strength to overcome an unhappy and abusive childhood. He transformed himself from a depressed, overweight young man into a U.S. Armed Forces icon. In Can't hurt me : master your mind and defy the odds (2018), he explains how he achieved his goals, and how applying perseverance, motivation, self-control, and his "The 40% Rule" will help you to succeed in life.

His book will inspire you to apply those principles to your own life. He will motivate you to believe in yourself and to realize that you are capable of overcoming the obstacles in front of you. After reading this book, you may find that not only can you reach your goals, but you might surpass them.

Read Can't Hurt Me on Hoopla or Overdrive today.

07 August 2020 • When We All Fall Asleep, Where Do We Go? by Billie Eilish
Shows ‘n Tunes: Movie, Music, and Game Reviews

One of the positive things during our extended times at home is discovering new music. Billie Eilish's album When We All Fall Asleep, Where Do We Go? (2019) is truly one worth listening to. Each song is so very carefully crafted by Billie and her brother Finneas that it leaves you wanting to listen to each song on repeat over and over. My recommendation is putting on some sound-canceling headphones to really dig in and enjoy every layer that is put into each song and to enjoy Billie's beautiful soft voice in songs.

Notable songs are "Bad Guy," You Should See Me in a Crown." and "My Strange Addiction." When We All Fall Asleep, Where Do We Go? won the Album of the Year, Best Pop Vocal Album, and Best Engineered Album, Non-Classical at the 2020 Grammy Awards. Also, "Bad Guy" won the 2020 Grammy Award for Record of the Year and Song of the Year. Eilish's sweep is rare: she is the first woman and second person ever to win the four main Grammy categories—and is the youngest person to win Album of the Year. Get all the details at Billboard.com.

Listen to the award-winning album on Hoopla today.

Echo begins as a fairy tale with Otto, a boy lost in the woods who meets three strange women telling him of a prophecy concerning a rare harmonica. From there, we hear three different stories of four pre-teen children who all live in different times, places, and circumstances, leaning on music to get them through hard times. The tales take you to Germany, Pennsylvania, and California, with storylines interconnected and centered around the possession of a rare harmonica. The audiobook was magical to listen to. I would recommend this beautiful, historical fairy tale to readers for all ages.

Start this film only if you're interested in the kind of drama that grabs your attention and refuses to let go for its entirety. (My only problem is the same one I have with all terrific movies that are rated R: in my opinion, these films would still be just as terrific if they were made PG).

Tommy Lee Jones, Javier Bardem, and Josh Brolin are at the top of their game in this intense story between good and evil (including the evil of greed and lust for money) with an ending not always what you're expecting. 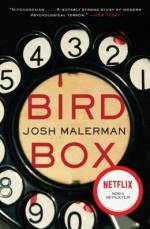 Imagine you hear a noise in a completely dark room. You think there very well might be a big crazy guy with a large knife ready to pounce right in front of you. Would you turn on the light?

That's the creepy tense feeling of Bird Box (2014). No crazy guy with a knife, but some strange abstract entities that cause people and animals that see them to go insane, kill others around them, and kill themselves.

This is the story of Malorie and her children as they try to find safety blindfolded and in a blindfolded world. Taking off the blindfold outside could mean madness and death. The book starts a few years into the ongoing horror then alternates flashbacks and current action.

Cassandra Campbell narrates with a calm but serious voice. You will want to hear the whole book by Josh Malerman in one sitting (about 9 hours). Visit Overdrive to read or listen to the book today.