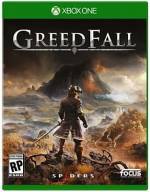 ​GreedFall (Rated M) for the PlayStation and Xbox One is an RPG adventure that will appeal to players who enjoyed the Assassins Creed and Dragon Age series of games.  In the game, you are an ambassador for a congregation of merchants who are searching for a cure to the plague that has afflicted yours and other nations.  The hope is that an expedition to an island filled with magic and a native people who exalt the land will reveal a cure.  Once on the island, you may choose from many companions who will complement your play style—whether it be careful political intrigue, magical tactician, stealth advantage, or simply to use combat-based dominance.

Overall, the plot is intricate, borrowing from many historical events, such as the inquisition, colonialism, and westward expansion, to name a few.  The story drives the game forward and gameplay allows for all levels of players, including a mode that has easy combat and focuses on following the plot over the gameplay.  Do remember that the choices you make while playing will affect the world around you and that the available options for the game's ending will change based on your decisions.